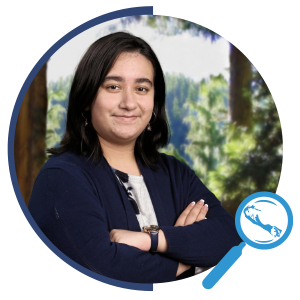 Sarah is the founder of You Are the Change, an international youth-led organization focusing on youth mobilizing action and mindsets to become sustainability leaders. Combining her interest in the climate tech space with climate activism. Sarah has done research on biodegradable plastics made from food scraps, polymers to aid in cleaning up oil spills compared to bioremediation, and worked on a biomass bio-sorbent made from orange and pomegranate peels with an additional polysaccharide aerogel component to remove 98% of oils, heavy metals, and organic compounds from water. She has also worked on increasing solar energy output using nanomaterials and to decrease water loss in agriculture. Some of her current projects revolve around cellular agriculture and carbon capture.  Her work has been recognized by parliament members and she has been named a Top 20 Under 20 Youth in the World, Top 25 Under 25 Environmentalist in Canada, Ontario Junior Citizen, National Nature Inspiration, and has won second place at national and international science fairs. Sarah has been featured in The Toronto Star, North York Mirror, The Weather Network, and  Top of the Class Podcast.

This past year, Sarah spoke to over 3500 individuals at notable places like the David Suzuki Foundation alongside David Suzuki and Severn-Cullis Suzuki, AERO Conference, World Unity Week, StarHands Girls Inspire Girls Conference, Peel Environmental Alliance, Earthburned, Cowichan Green Community, and National Youth Summit at CCYP. She is a published poet in 2 national books and my climate activism-related poetry has won an international honorable mention at the GENIUS Olympiad.