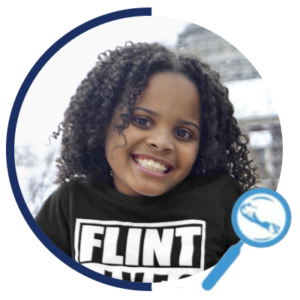 Mari is a 14 year old from Flint, Michigan known globally as Little Miss Flint. Born on July 6th, 2007. She first rose to the public spotlight when her letter to President Obama about the water crisis prompted him to visit the city and survey the water crisis for himself. That visit ultimately led to him approving $100 million dollars in relief for the city of Flint. Her young age has not prevented her from making a significant impact on the dialogue around environmental racism and confronted the entire country with the reality faced by victims of state negligence. Her youthful honesty prevents political leaders from being able to ignore the consequences of neglectful leadership. She gives voice to the unheard hardships of Americans trapped by a collapsing and toxic infrastructure.

In 2017 Mari continued her dedication to social justice by becoming a national youth ambassador to the Women’s March on Washington and the National Climate Mari. Mari is also dedicated to preventing bullying and works with the anti-bullying group Trendsetters Productions. She is also a member of the Flint Youth Justice League. She also sat on the 2019 Kid Box board of directors as the chairwoman of the board. She also proudly works with Eighteen by 18, a youth organization founded by her mentor Yara Shahidi. Mari has also spoken twice at the March for Science about how the Flint water crisis has affected her community. Mari has a doll that is modeled after her by the doll company Lottie. She also sits on the Flint Youth Justice League and the MDE Anti-Racism Student Advisory Council.

Mari has used her platform to not only bring awareness to her community but to give back. Mari has raised over $500,000 for her Flint Kids projects including giving out over 16,000 backpacks stuffed with school supplies, a yearly Christmas event with thousands of toys, Easter baskets, movie screenings, and more. She has a book project where she gets books by authors of color into the hands of local children. Her dear Flint Kids letter project has received thousands of letters of support to the children of Flint from people all around the world. She has also raised over $250k and given away over a million bottles of bottled water. But she takes the most pride in pivoting away from single-use bottled water to partnering with a company (Hydroviv) to produce her very own water filter, that is shipped all over the country to those that are facing toxic drinking water, to date she has raised over $400k to produce her filters.

Mari Copeny has been featured in Teen Vogue, The Guardian, VICE, TIME, Refinery 29, The Washington Post, NBC News, Rewire, Buzzfeed, and more for her vocal opposition to the injustices of environmental racism. When Mari grows up she plans on running for president in 2044.